The last week I continued along the coast with Kai and Meike into Kenya but in Diani we split up because Kai wanted to do some kitesurfing and I had my mind set on doing some safari's before I leave for the winter cold of europe.
Just when I reached the 40000 km mark, it was time for my first flat tyre of the trip. The heavy duty tube I was using did a good job, but because it was one size too big for the tyre, it was folded inside and this caused it to split. It was a shame it was unrepaireble because in the next days I would have 2 more flat tyres. One on the replacement and one on a chinese one. This proves to me this 4mm thick tube realy was the way to go. 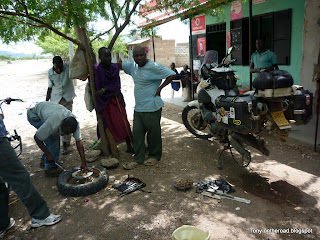 Luckily, in Africa, help is never far away. 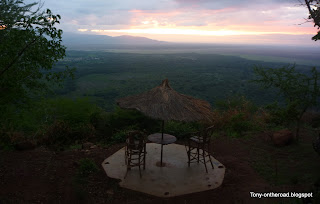 I booked a 2 day safari for 310 dollar in Moshi. First day we would go to Lake Manyara N.P. and the second we would drive down the famous Ngorongoro crater, a place I wanted to visit since long before this trip.
Although I was focussed on Ngorongoro, Manyara was just as beautifull, teeming with wildlife and stunning vista's. As this is the start of the raining season, half of the days it was pretty cloudy, but the sun would always be present too.
The safari was well organised, and my French and Spanish companions and I enjoyed the scenary from the open roof safari vehicle and the lunch box stops surrounded by wild animals. 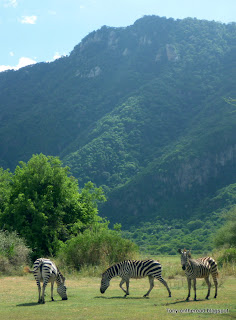 As I was driving into the gridlocked traffic of Nairobi, my new chinese innertyre was losing air, so I had to stop every 5 km to put more air in. By then, my chinese replacement gps touchscreen also wasn't working any more, so finding Jungle Junction was a challenge, but the helpfull africans once again came to the rescue, and after helping me fixing the flat tyre, the gasstation boss, printed  a googlemaps plan to JJ's. I was relieved to drive up to the gate, knowing the ordeal was over. I made it, 1 year and 40000 km through Africa pushed me physically and mentally to the limit. And as I stood there,dirty and tired, I noticed my Yamaha leaked some oil from the front forks onto the front wheel. It was as if we both had to wipe away a tear, both happy and sad it was over.

I just have to thank Geert Van de Gucht here from Brussels Airlines for his amazing help. At the beginning of this year, he drove his bike to Nairobi and as a biker, he knows how hard it can be on the road, and how much you rely on the help of your friends. If it wasn't for him, my trip would have ended in Capetown.
Gepost door Tony op 05:45 10 opmerkingen: 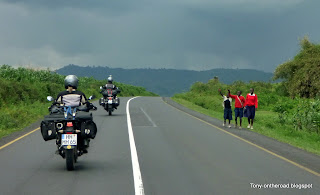 Driving with Kai and Meike, we ran into some other motorbike travellers, even 3 Belgians, but as they were all going south, we weren't to spend much time with them, still, it's always nice to meet other overlanders, exchanging stories and tips about the road and places to stay.

Makuzi beach lodge 50 km south of Nkata Bay, Malawi is one of those vacation brochure type of of places and a real recommendation, cheap, excellent food and just one of the nicest places of the whole trip. 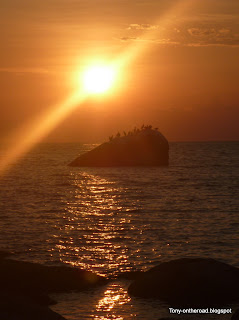 The first days in Tanzania we were accompanied by some rains in the afternoon but we made good progress on the main road from Mbeya towards Dar Es Salaam. 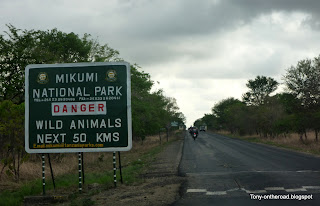 The road crosses the Mikumi NP and we were delighted to find all sorts of wildlife just next to the road like giraffe and elephant. When I drove into the bush to take a closer look at the elephants, one came charging towards me, making it clear that was not a good idea, so I quickly made a run for it. 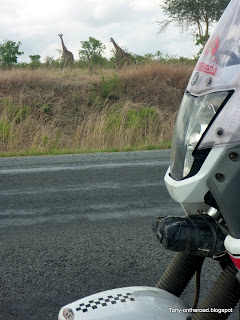 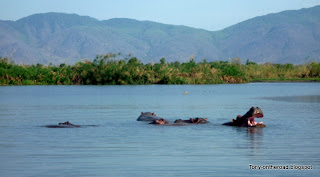 I looked forward to Malawi for a long time, being in Southern Africa was nice, but for me, Malawi enbodies the real, raw, black Africa that I enjoyed so much in west & central Africa, but in a nice and touristy setting. So far, it didn't disappoint. I came in via the Mozambiqan Tete corridor, which cost me 86 dollar for a one day crossing from Zimbabwe and spend 1 night at the lovely Doogles lodge in Blantyre. Prices here are affordable for the first time since DRC, cola for 0,5 euro or a half litre of Kutche Kutche beer for a euro.
First stop was Liwonde NP, where a boat trip on the Shire river reveiled an Africa from the documentaries, the riverbanks full of wildlife, all posing willingly for the camera's.
Then a few days were spend at Cape Mc Clear where for the first time in months, I saw some overland bikers arrive. Kai & Meike are driving the BMW's from Capetown to Hamburg in 6 months, and are only 6 weeks into the trip, so they will have to slow down. It was quickly decided that the slowing down would be done together through Malawi, leisurely following the lake northwards up to Tanzania.
First I had an appointment with an old friend, Tony Gahegan, who was my driving companion from Morocco to Mali, was in the capital, Lilongwe, so I spend 2 days in his company. It was good to meet up again and share stories and when I was there he finally sold his bike, so he now can get on to India, on his RTW (roundtheworld) trip. see www.tgon.co.uk
I found Meike & Kai again in Senga, where we had thre opportunity to go on the lake on a catamaran. Having sailed many years with my father I felt I was up for it, but after only half an hour, just as we passed out of sight behind a little island, I managed to capseize it and we soon found out, it wouldn't upright again and worse, it was sinking. The day before, a fisherman was eaten by a crocodile, they only recovered his head, and now we were in the water, holding on to a sinking boat. Luckily we were spotted by another little tourist boat, as Kai was pretty seasick by then. The cat was towed to shore and the damage added up to 2 ripped  sails and a hole in the hull, but we were alright, so it could have been worse I guess.
Next stop by the lake was one of the most picturesque of Africa so far, Makuzi beach, 50 km south of Nkatha bay. A little piece of paradise. 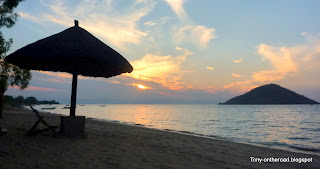 As I was just transiting Botswana, it was crossed without much thrills and just a few days later I arrived in Zimbabwe, the country of the infamous President Mugabe. In Zimbabwe you can use American dollars, Botwana Pula or SA rand, they don't have their own currency anymore since 2009. This makes for the American dollar to be misused and prices are high everywhere, especially for accommodation and food. Spare change is given in rand coins, but there are not enough coins, so a lot of things cost exactly 1 dollar, or 2 for a dollar, 3 for a dollar and so on. 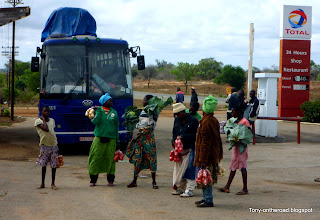 At Bulawayo I found a nice overland place 6 km out of town, called Burkes Backpackers where I met a Brit/South African couple, Rachel & Richard and later a Brazilian couple, Flora & Nathan. 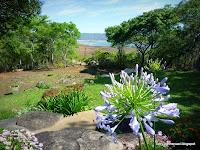 From there, it was on to the 'Great Zimbabwe national monument' which gave Zimbabwe it's name in 1980, before that time it was called Rhodesia. It is an impressive site that has the oldest ruins in Sub-Saharan Africa dating from the 13th century. The 3 hour tour took us to the King's Hill complex and the great enclosure with it's high drystone walls. 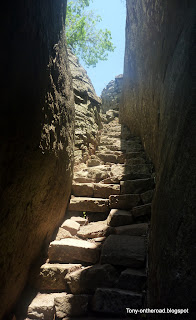 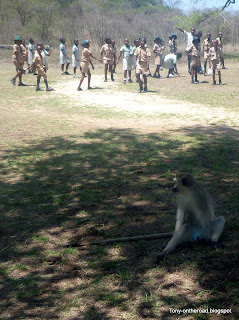 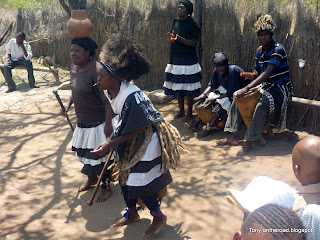 That night, the 5 of us had a fancy dinner because it was Richard's 40th birthday (mine is coming up soon too) and the following morning I set course for the Chimanimani NP in the Eastern mountains. The road out of 'great Zimbabwe' was one of the most scenic and authentic I have seen in the whole of southern Africa, cutting through the rocky landscape, going round the lake via the dam and all the time passing tiny hut villages. At Chimanimani we visited the bridal veil falls, enjoyed the beautifull natural surroundings and did some shopping in the small but charming village. 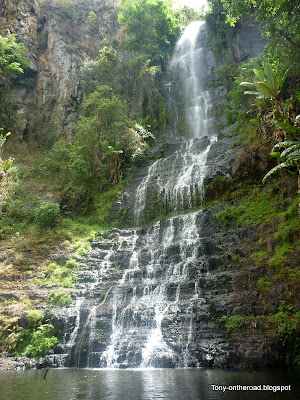 The next days I continued North up to Mutare and into the vumba mountains where I ran into Ana & Evaristo in their Spanisch truck. We met already in Cameroun and DRC and it was a nice reuion. The bunga forest national park proved to be an incredible video opportunity with some nice video of me on the bike and of a pack of babboons.The video is posted below.

The last days in Zimbabwe will be spent in the mountains North of Mutare, past the Nyagara NP up to the border post with Mozambique. 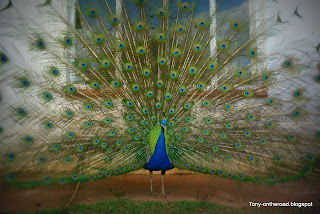 After a short crossing of Mozambique, I will arrive into Malawi in about a week, which I'm realy looking forward to. I've also started taking anti-malaria medicin again, as in november, the short rainy season is starting here in east africa. 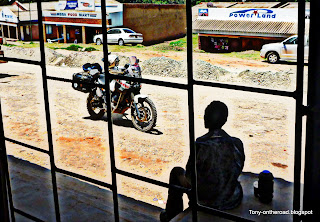 Tony
From the beginning of this century I've been traveling all over Europe on big motorbikes, and in 2007 I had my first taste of Africa, starting in Morocco, which is one of my favorite countries by now. I had the privilege to explore the rest of Africa from 2012 to 2017, and now I'm on my way to Mongolia, this time in a landrover defender. 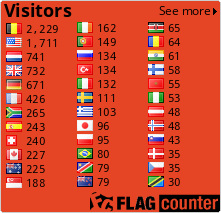 Watch my previous trips on my